A Seat for the Rabble

I’ve written an epic fantasy novel. I’m currently on the third draft of A Seat for the Rabble and seeking a publisher. 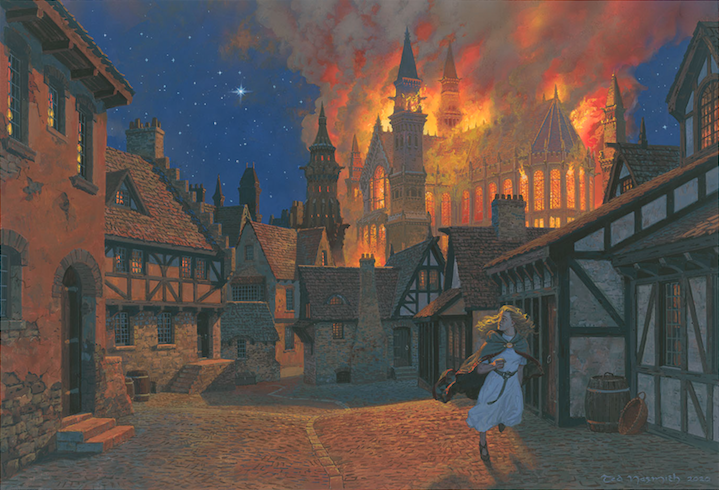 Ted Nasmith, widely considered one of the world’s top three The Lord of the Rings artists, painted this original piece for the book cover. Here, Sara Sothron flees a sacred temple set ablaze by rebels.

Set in a world of high fantasy, A Seat for the Rabble tells the story of a kingdom on the edge of unraveling. A king dies without an heir, and in Loran, that triggers the Kingstrials, the ancient bloodsport that determines who will sit the symbolically important Silver Walls, castle of the First King. Only the king’s bastard son, Jason Warchild, can enter the Kingstrials to save his family and kingdom from a circle of rivals that includes his father’s treacherous brother, a zealot who would crush the already-beleaguered Common peasants. Helped by his uncle, the infamous traitor Evan Sinclair, Jason and his politically astute sister seek the aid of mighty lords, enlightened reformers, and anyone brave enough to back a bastard for king.

As political intrigue and bloodsport consume a venal ruling elite’s attention, the threat of rebellion grows, with a class of enlightened merchants ready to take matters into their own hands for a fairer, more just realm ruled by reason—even if it means destroying the crown the victor of the Kingstrials would wear.

Yet something else lurks on the edges, an ancient evil that would purge the world of men. It feeds on the chaos of a kingdom torn asunder by ambition, suffering, and betrayal. Only the semi-mythical Ascendant King, last heir of the First King, may contest this power, but that bloodline is lost. A boy hostage may be the key to finding the heir, the One True King of all the world, but time is short, and the nobles of Loran will have their king . . . if any survive the Trials.

My map of the world of Odma, featuring the continents of Ansara and Casaan and the conflict-torn region called the Brace. In this world lives ordinary men and women, their kings and lords, merpeople, fearsome griffons, and rarely seen dragons.

Disclaimer: Some of this content may be NSFW. The subject matter is intended for mature audiences, as it deals with the sometimes unpleasant realities of life in the medieval ages, which helped inspire this fictional fantasy novel.